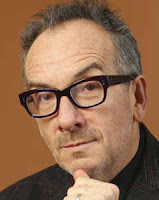 As the summer faded so did the crowds at Canalside. Jackson and Lexi, despite the lack of activity and the encroaching winter still liked going down there to sit on the benches and look out at the rapidly cooling waters of Lake Erie. Occasionally, they would touch hands and maybe even share a kiss, but mostly they looked at the water, enjoying its peaceful, rhythmic movement.
With the Thanksgiving holiday only a week away, they fell into a conversation about their dysfunctional families and the disasters that seemed to always accompany the holiday when a man sitting on the next bench asked them for the time. He was bundled up pretty good and had a modest but identifiable British accent.


“Excuse me, might you have the time? I seem to have misplaced my device.”
Jackson pulled his phone from his pocket, “Three-twenty.”
“Thank you, sir.”
Jackson turned back to Lexi, but her gaze remained fixed on the man. After a moment she whispered in Jackson’s ear, “I think that’s Elvis Costello.”
“No way,” Jackson responded looking over at the bundled up man staring out at the water.
“No, really. He’s playing at Shea’s tomorrow night.”
Impulsively, Jackson yelled out, “Elvis Costello.”
The man looked over at them and pulled his hand from his coat pocket, waved without much enthusiasm and said, “Aye.”
Lexi was up in a flash, introducing herself and her boyfriend, Jackson.
The man remained seated with placid look on his face until Lexi told him how much she enjoyed his work with the Brodsky Quartet and Burt Bacharach. With a burst of energy he stood up, extended his hand and with a broad smile said, “God bless you child.”

“I like your other work too, but I really admire the risks you took with those projects.”
Knowing Costello had to cancel an earlier part of his tour due to a cancerous malignancy Jackson asked, “So, how ya feeling?”
“A bit dodgy now and then, but well, considering all the trauma my body’s had to endure.”
“By the way,” Jackson said with a smile, “I like the Brodsky stuff too, but my favorite is Get Happy.”
“Ah, pure adrenaline rock-n-roll, but with heart. Wouldn’t you say?”
As Jackson and Lexi agreed about the greatness of Get Happy, three man boys dressed almost identically in skinny jeans, scarves and beards were walking by and instantly recognized Costello. They were sharing a cheap fifth of vodka and were only distinguishable from one and other by the color suit jackets and how they adorned their heads. One had a straw pork pie hat, one had a dark skull cap and the third guy had a ridiculous man bun. The man bun guy instantly started to go on and on about the greatness of “What’s So Funny Bout Peace, Love and Understanding.”
Costello stood listening patiently as man bun guy extolled the virtues of the song. But, eventually Lexi interrupted him, “Excuse me, but Mr. Costello only covered that song. Nick Lowe wrote it.”
The three hipsters fell into uproarious laughter, slapping each other on the back.
Costello rolled his eyes and looking at Jackson and Lexi mouthed the words…’Bloody, Fucking, Hell,’ and then with a smirk forcefully said, “Ya know, she’s right. Nick Lowe wrote the bloody fucking song.”
All of the sudden the three hipsters grabbed their throats as if they were choking and a minute later fell to the ground—the life gone from their bodies.
“Shit,” Costello yelled. “I’ve gone and killed three more fucking hipsters with my bloody smirk. Shit.”
He paused for a second, gathered himself and calmly said, “Jackson can you ring up the authorities, please.”
As Jackson made the 911 call Costello began to kick the lifeless bodies on the ground, complaining, “You-fucking-wankers... now-I’m-going-to-have-to-spend-all bloody-night-at-the-police-station. I’m-going-to-have-to-meet-with-your-families-and-look-into-their-pain-stricken-eyes. You-fucking-tossers.” He stopped for a moment and said, “Jackson, Lexi, feel free to get a bit of this too, cause you’re going to be at the police station all night too.”
And with that he resumed kicking the bodies.
Posted by P.A.Kane at 2:08 PM
Email ThisBlogThis!Share to TwitterShare to FacebookShare to Pinterest