Just a reminder...BOOK SIGNING: THIS SATURDAY OCTOBER 29, 2016... TALTY'S TAVERN 2056 SOUTH PARK (corner of SHEFFIELD) SO.BUFFALO, NY. 3-7pm...you can buy a book from me, bring a book or just come and hang out with us. Should be fun.
Written In The Stars: The Book Of Molly 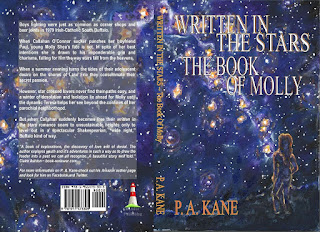 Chapter 1
McDougal had a blood disease or some pituitary dysfunction bullshit that made him a little sissy runt. He wasn’t the kind of sissy runt fuck that would cower and not fight when the bigger kids kicked him around, he just had that pituitary shit that made him little and weak. One spring day in the 9th grade when I was making my way through the transition hallway from the old building to the new building of South Park High School this red-headed moron gorilla 10th grader, Talty McManus kicked McDougal into me and the little shit got tangled in my legs causing both of us to fall and my books spilled all over the floor. Now, I didn’t really give a shit about that little runt fuck McDougal, people could kick him all they wanted as far as I was concerned, but as I lay there all twisted up with him, like always I got really mad, especially at the sound of that fucking moron gorilla McManus and his friends laughing while I was on the hallway floor with McDougal.
Once untangled, I scooped up my heavy Literature Today book, jumped to my feet and with both hands cracked McManus right upside his giant red moron head causing him to stumble back into the hallway wall. His friends grabbed me and locked me up and when McManus regained his equilibrium, he proceeded to bash the shit out of me until the shop teacher, Mr. Pierson came and broke it up, Still really mad and not giving a shit about consequences, the second I was released I threw a punch at McManus, which just grazed his jaw and eventually landed on the chin of a very angry Mr. Pierson. What did I care? Five days off... maybe I’d punch ten more of these fucking morons and slide right into summer vacation.
The four of us, the flame headed gorilla McManus, his two friends and myself were sent to the detention room. It was determined that McDougal was the victim in all of this and was sent along to class. Mr. Franklin the imposing security guard babysat us as we theoretically waited for our parents to pick us up. Over the next hour or so McManus’ friends were escorted out leaving just the two of us there separated by Mr. Franklin. I settled in with a Nick Hornby book I was reading knowing my dad, if they could even contact him, would tell school officials to fuck off, I was their problem from 0745-0245.
Read more »
Posted by P.A.Kane at 2:41 AM No comments:

I always thought Bob Dylan’s Christian period in the late 70’s, early 80’s was a bit of a ruse. Forever maximizing the mystery trend while being the permanent proprietor of the next cool thing I assumed the calculus went something like: Guthrie folk...protest song… electric…dropped out…Wailing Wall when John, Paul, George and Ringo went Eastern… a couple of suspect albums to reduce the heat…the greatest break-up record of all time…all that heat again…next thing?...hmm…Christian?  No, they wouldn’t or maybe…hmmm? Hence, the birth of Slow Train Coming.
To me it seemed pretty unlikely that a guy as smart as Dylan and as Jewish and forty years old could fall for Jesus. There had to be an angle…right? But, tooling around the other day in my work truck in the brilliant crisp sixty-degree sun, Gotta Serve Somebody found its way into the rotation on my iPod and I fell right in line with its modest proselytizing funk. I didn’t pull over at The Church of St. Casmir’s to make a devotional, but the song did make me feel vast and expansive and reminded me there are things in this life bigger than the wants and needs of my ego; things that might not benefit me personally, but still require my attention and service. I also felt a little silly questioning Dylan’s sincerity, considering how the song drew me in and hooked me—what did it matter if he was sincere?


Next I did what I almost never do anymore; I clicked out of shuffle mode and listened to the rest of the album. It was a lovely, inspiring forty-minutes that filled me with the spirit of Christ for the remainder of the afternoon in spite of the fact that I am a lapsed Catholic and don’t identify as a Christian anymore. I still have a deep and abiding love for Jesus, but the man-made institutions that assert authority over Christ—not for me.

A Musical Guide to: McDougal...