1)Tell us a little bit about yourself. How did you get into writing? 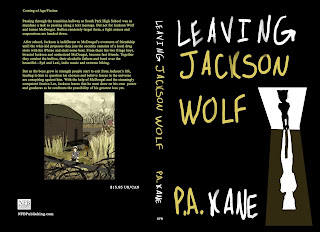 I grew up in a small three bedroom/one bathroom house with my parents and nine siblings in Buffalo, New York. Presently, I live in a suburb of Buffalo with my wife and three college age children, who are never going to leave.

As far as how I started to write. I went through a pretty aimless period after high school where I couldn’t figure out what I wanted to do and was in and out of college.  Finally, in my early twenties I started read in a pretty serious way—stuff like Kerouac, Philip Roth, the poetry of Anne Sexton—which led me to want to give writing a shot. Problem was by the time I was all read up I was in my late twenties and had the pressure of trying to keep a roof over my head and a pretty serious girlfriend, whom I would eventually marry and have children with, so I had to shelve the writing thing. But when the kids got older and needed me less, I started to get up before work (really the middle of the night) make some coffee and write for a few hours. Few years later I have two published novels and a book of essays on the way, plus a million other ideas for books.


2) What inspired you to write your book?
Leaving Jackson Wolf was intended to be a novella about Jackson’s friend McDougal. But as I got into it I realized the book was more about Jackson and his relationship with his father which was fraught with so much anger and dysfunction. This compelled me to explore how a fifteen-year-old kid would not only survive the violent dysfunction of his home life, but the possible outcomes on the other side of it. I also wanted to talk about guys interact with each other and tried to portray Jackson and McDougal without all the tough guy underpinnings of traditional male relationships. Both boys are pretty tough, but they aren’t afraid to be vulnerable with each other and to care for each other in a way you don’t see much, but I think healthy. I’m pretty sick of the toxic way guys measure themselves with each other.

3) What theme or message do you hope readers will take away from your book?
I would hope when people read this they find value in owning up and being accountable for your life. Jackson makes many mistakes, but rather than wallow in his failures, he is persistent and moves forward trying to do better, always trying to find his power. Additionally, the boys love indie music and in dark times not only is it a friend that helps them feel less alone, but it also provides great perspective on life. So I would hope people might look into some of the fifty plus artists mentioned in the book and give them a good listen or just listen to good music in general.
4) What drew you into this particular genre?
I’m not really drawn to a genre. I just wanted to tell a story about two boys trying to make their way through a complicated world. The writing world seems to be genre and series driven, but all I really want to do is write stories about real people in real life situations regardless of their age or whatever.

5) If you could sit down with any character in your book, what would you ask them and why?
Though she wasn’t in the book much I would like to sit with Jackson’s mom and get a update on where she was and what happened to her. Maybe this is a little voyeuristic and creepy, but I also would like to sit off to the side back at The Spot with Jackson and McDougal and just listen to them and talk music and the wonders of the female persuasion with a couple of beers. I’d like to hear the excitement in their voices as they talk about all the possibilities still ahead for them.
6) What social media site has been the most helpful in developing your readership?
Boy, this social media thing is so overwhelming and so competitive. Too much for the one-man operation I run. I mostly use Facebook and I mostly do a bad job with it. Going forward as I gather more resources I’m going to invest in some outside help.

7) What advice would you give to aspiring or just starting authors out there?
Don’t be afraid to start small. With the recent baseball playoffs I was reminded of being in a school lavatory back in the day and some older boys had a transistor radio and were listening to the World Series. From that single image of the boys with the radio in the lavatory I got this pretty cool story Knox, O'Malley, Sheena and The Miracle Mets. From little seeds a tree can grow.

8) What does the future hold in store for you? Any new books/projects on the horizon?
Presently editing a book of essays that I hope to publish in the spring/summer of 2019.
I have this new character, O’Malley, that I’ve been sketching on my blog and a couple chapters of another novel.

Posted by P.A.Kane at 1:00 AM
Email ThisBlogThis!Share to TwitterShare to FacebookShare to Pinterest