The open letter published at Canada Free Press by Buffalo talk show host Tom Bauerle warning President Trump of deep state forces attempting to take down his presidency has local author P.A.Kane (Written In The Stars:The Book Of Molly) feeling anxious too.
The letter contains photo and video evidence along with expert testimony recounting  several incidents, dating back to 2013, where Bauerle believes he and his family became the subject of high tech surveillance by New York Governor Andrew Cuomo for the strong stance he took on his radio show against the Safe-Act (which primarily reduces the size of a gun clip). Feeling he was being observed by nefarious forces Bauerle made several calls to local police, but when they found no evidence of surveillance the talk show host asserted the ruthless Cuomo was employing new cloaking technologies such as non-linear optics and adaptive camouflage to track his movements. Now, given the endless leaks emanating from the White House, Bauerle believes deep state forces are using these same cloaking techniques in an attempt to bring down the Trump presidency.
Though an ardent Progressive, opposed to both Bauerle and the Trump administration  Kane has been noticing some strange occurrences in his own back yard and believes he too is the subject of deep state cloaking surveillance.


After a long day of writing and working a day job, weather permitting, Kane likes to relax on the porch off his garage with a bourbon and a book while taking in the copious foliage in his yard. But, almost to the day, when Trump came riding down that escalator in 2015, the trees and bushes in his yard seem to always bend to the north even when the wind is blowing in the opposite direction.
“It’s very strange,” Kane said. “Trump announces he’s running for President and all of the sudden everything in my yard starts to sway and bend in the same direction. A little weird, right?”(See video)
Then there’s the case of his dog: Kaya Francis Bean.
“Yeah,” Kane said, “KFB loves to run and prior to all this Trump business I would throw sticks and balls and she would chase them down like Florence Griffith-Joyner and bring them back to me. It was great fun. Now, when I throw a stick she still gets all Flo-Jo on it, but she won’t bring it back. Instead she punks me and makes me chase her down. Is that a coincidence or maybe the little hardened growth between KFB’s  ears that just appeared out of nowhere is a deep state chip and someone in adaptive camouflage is directing her to mess with me? This is really cruel and hurts my little snowflake heart. I want my dog back”  (See video)
The most damning evidence of deep state monitoring according to Kane is a recent video that just showed up on his YouTube page out of thin air.
“This is really disturbing. I’m sitting on my garage porch with a book, a drink and some music. All of the sudden LCD Soundsystem finds its way into the rotation and everybody knows I get happy feet when I hear anything by the great James Murphy and can't help but throw down some of my white man moves. You might think I'd be a little self-conscious, but hell, who's going to see this abomination in my fenced in yard? At least that’s what I thought.
Next morning I get an email from YouTube telling me my video has been “successfully uploaded.” What? I click the link and on my YouTube there’s a video of me dancing to the LCD tune. I can’t delete it and when I reach out to tech support I just get error messages.
Another coincidence or something else? Maybe the the deep state?” Kane asks with a furrowed brow.(See video)
Asked why the author of one coming of age novel set in 1979 South Buffalo that ranks 1,611,649 in sales at Amazon would garner all this high-tech attention from the deep state?
Nodding confidently Kane says, “Look, I sit on that porch and think reasonable, pragmatic thoughts. I read good books by Ta-Nehsi Coates (Between The World And Me) and agree with the case he made for reparations in The Atlantic. I dream about single payer health care that will cut my costs by at least a third with better outcomes. I know Trump’s goddamn tax reform is just going to be another tax cut for the rich which will add trillions to the debt and spur zero growth. I know that the round the clock fear they peddle on FOX News and right wing radio is utter nonsense. In fact, I jumped in on a Facebook thread after London Bridge attacks that was hysterical with this idea that Islamic terrorists are going to kill all of us. Very calmly I pointed out that less than one-hundred people in the U.S. have died from terrorism since 9/11 and you’re sixty-eight times more likely to be killed from being struck by lightning than a terrorist attack. The host of the thread responded to my post by calling me a: “sanctimonious dick,” and then unfriended me. 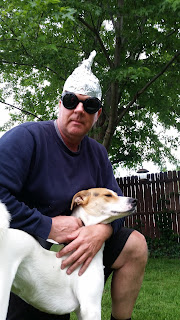 That’s why they’re watching me. I’m calm, reasonable, pragmatic and can back up my positions with reality based facts. The right thinks facts are a liberal bias so to them I’m very dangerous.”
Kane was uncertain when asked how he planned to eliminate these deep state forces plaguing him, “They seem to want to mess with me rather than hurt me at this point, so I’m going to watch them, watch me and hopefully with the help of some cloaking recognition goggles I got on Amazon for $49.99 they’ll make a mistake and I’ll be able to make a video record of the surveillance with my phone.”


Posted by P.A.Kane at 5:52 PM
Email ThisBlogThis!Share to TwitterShare to FacebookShare to Pinterest