Built on thirty bricks and his wife’s homemade, Sriracha soaked, mac-n-cheese, twenty-eight-year vet, Big Wayne is the bearish anchor of the A-Belt. As the morning sort begins he stands with gloved hands looking up the moving conveyor belt with a certain amount of dread at his co-workers at the top of the line engaged in conversation. As the packages roll down and start to assemble in front of Big Wayne you can hear him audibly sigh as he looks at the pile of boxes and letters. Just like yesterday, just like every day, many of the packages from Amazon, Walmart and Verizon were missed by the still talking and 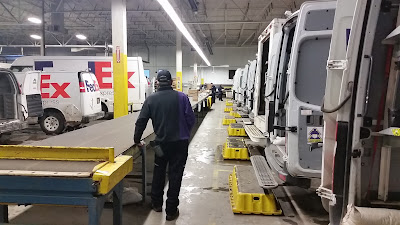 Setting the packages on the steel gearbox enclosure halfway up the belt, he spreads his arms in disbelief and yells to his still talking his co-workers, “Hey, the weekend’s over, it’s sort time,” Having their conversation interrupted they give Big Wayne a funny look before resuming their conversation.
Returning to his position he finds still more packages that aren’t his spinning against the blocking bar at the end of the belt. Exiting the big 700 that carries the mall freight, the mall guy says, “Might be a long morning, looks like Toys R Us is getting a bulker.”
Big Wayne responds to this information with an exasperated eye roll as he removes his and 217’s and 218’s freight from the belt. After the mall guy and Big Wayne get caught up the freight momentarily thins out, just as late starter Donna (218) arrives at her truck. Having seen the printout of her stops Big Wayne gives her the rundown and reminds her about the crazy pit bull at 323 Aurora, which is getting their monthly “Direct Signature,” medication today.
The conversation changes, Big Wayne tells Donna about the Toys R Us bulker that’s been wreaking havoc all morning, while he leans against her Sprinter with one foot on the bumper, sipping from a stainless steel travel mug, Watching the mall guy remove some packages from the belt and walk them up to the steel gearbox an annoyed look comes to Big Wayne’s face and he steps down from Donna’s bumper looks up the belt and sees the same guys still talking and yells up at them, “More pawin and less jawin,” as he makes angry pawing gestures with the hand not holding his coffee. Irked, he turns to Donna, who is standing on the step aide at the back of her Sprinter and says, “What are they doing up there?”

The sort ebbs and flows and as unrouted packages start to find their way into the mix Big Wayne asks Dave, who works across the belt and is back from being sick with the flu if all these unrouted Orchard Park packages go to him or up the belt.
Dave looks them over for a second and says, “Up the belt.”
Flustered, Big Wayne asks, “Why don’t they pull them?”
Smirking, Dave says in the shifting warehouse light that is distorted due to his huge Andre the Giant like head, “Because it’s not their job to pull unrouted packages Big Wayne.”
Throwing up his hands in disgust Big Wayne says “What are they doing up there?”
Dave smiles and says, “Maybe you ought to touch up your coffee with a hit of  Sriracha.”
But, Big Wayne is not amused and proceeds to ignore all the missed packages spinning at the end of the belt and only pulls his assigned freight— just like the guys up the belt and everyone else too.. No more Mister Nice Guy he thinks to himself. No more trying to be a team player.
Then, late starter Rick, who always shows before his scheduled start time and is real chatty draws the mall guy into a conversation about Yes getting into the Rock-n-Roll Hall of Fame while the Toys R Us bulker continues to be a problem. Soon the Toys R Us packages are mixed in with the other routed and unrouted missed packages at end of the belt and it’s one giant mess. Big Wayne sticks to his no more Mister Nice Guy edict, while the mall guy and Donna, who is back from her sort position, straighten out all the missed freight.
Frustrated, Donna says, “What are they doing up there?”
Seething, Big Wayne just shrugs his shoulders and under his breath says, “I don’t know what they’re doing up there, but I’m sure we’ll do it all again tomorrow.”
Posted by P.A.Kane at 2:22 PM
Email ThisBlogThis!Share to TwitterShare to FacebookShare to Pinterest